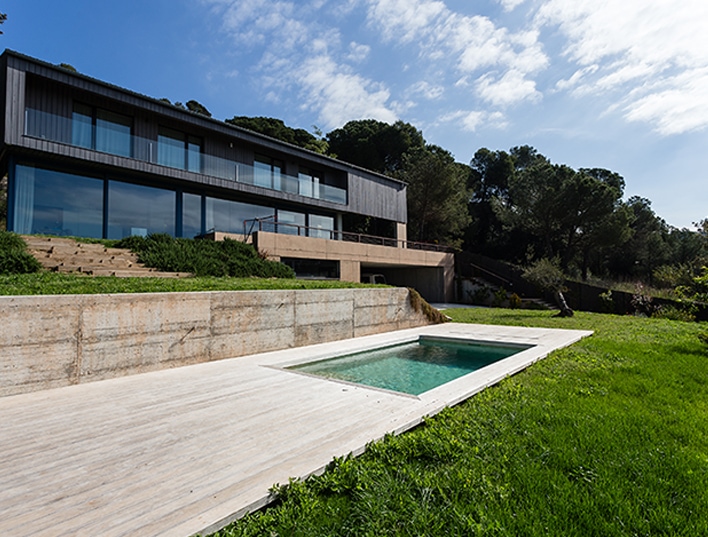 Energy consumption from DHW use is often higher than heating and cooling requirements in a residential Passivhaus. This is mainly due to the large losses inherent in storing and recirculating hot water, and because heating and cooling demands are very low.

Energy consumption from DHW use is often higher than heating and cooling requirements in a residential Passivhaus. This is mainly due to the large losses inherent in storing and recirculating hot water, and because heating and cooling demands are very low, thanks to an optimised fabric design that minimises thermal losses/gains. Reducing the net energy consumption of DHW in Passivhaus is therefore important.

The article presents monitored data from a solar PV installation for a single-family certified Passivhaus in Girona, Spain, designed by Tigges Architekt and Energiehaus Arquitectos, with services installed by Progetic (Figure 1 & Figure 2). The system diverts surplus PV production to an electric immersion heater in the DHW tank, where the primary generator for hot water is an air-source heat pump.

The first step is always to optimise DHW system design and reduce losses. The second step is to find simple and low-maintenance solutions for on-site renewable energy generation for DHW production. The solution implemented here is an all-electric system that reduces net hot water energy consumption, using a solar PV array to top up hot water production, with an air-source heat pump as the main hot water generator. The system avoids the maintenance problems found in solar thermal systems that are susceptible to overheating in summer months when occupants are away, where fluid dry-up in the primary circuit between panel and tank is a frequent cause of failure.

A series of calculations were done with the PHPP tool, to determine useful energy demands, final energy consumption and projected energy bills, by category. For the calculation of the energy bill, the weighted price of electricity was calculated at € 0.21 / kWh. Additionally, an analysis of DHW demand and losses by category was made. Figure 3, Figure 4, Figure 5 and Figure 6 show the results.

DHW consumption appears as the second highest energy consumer, 34% of the total. If we look at DHW demand and losses, only 33% is due to heating hot water, the remaining 67% are losses, of which 44% are due to recirculation, 18% due to individual pipes, and a 5% for storage. The total predicted final energy consumption for DHW is 1,764 kWh, an average of 147 kWh/month.

The system incorporates a PV array with 12 polycrystalline modules and a peak power of 3.18 kWp (Figure 7), and a 3 kW inverter. The main hot water generator is a 6 kW ait-to-water heat pump (wich also supplies heating and cooling, with a 500-liter DHW tank and 3-kW electrical immersion heater (Figure 8). DHW production is isntantaneous. When the sun is shining and there is more PV generation than electrical consumption in the home, a control system diverts the electrical energy from the PV panels that cannot be self-consumed into thermal energy in the DHW tank for use in the afternoon or evening (Figure 9).

This is particularly interesting in the summer in passive houses in warm climates with active cooling and only one heat pump, as it generally allows the heat pump to keep itself in cooling mode, rather than stopping, reversing and going into hot water heating mode, before reverting back to cooling (for example, when occupants return home in the afternoon and shower etc). The hysteresis in this process can mean the home is without active cooling during 2/3 hours, which can be a problem in comfort terms. The control system monitors the home’s electricity consumption and PV production, sending surplus electricity to the resistance in the DHW tank. The power of the resistance heater is modulated through a voltage regulator, due to the fact that the output power of the photovoltaic generator varies continuously according to the level of solar radiation, and that the available surplus depends on the transient electricity consumption of the house.

Monitoring data for 2018-2019 shows a total of 1211 kWh of PV production was diverted to the electrical resistance in the DHW tank, with a peak water temperature of 58 ºC. PHPP calculations projected that DHW consumption was 1764 kWh. Logically, not all of the PV energy diverted to the DHW tank is useful, as it depends on when DHW consumption takes place. Nonetheless, the system shows that solar PV top-up is effective for assisting in hot water generation, thereby reducing net energy consumption derived from hot water use, shown in (Figure 10) and (Figure 11) below.